A new season means an update to both the Osprey Meridian and Osprey Sojourn wheeled backpacks, which have proven popular with our customers since they were introduced to our wheeled backpack range in October 2015. As Osprey have updated some of their range for Fall 2016, there have been a couple of changes to their Meridian and Sojourn packs. In this post, I will talk you through the key changes and also compare the two models to help you decide which is best for your style of travel. 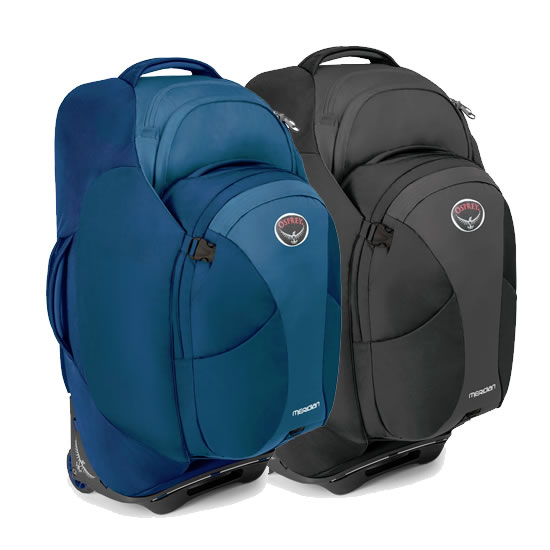 Out of the two, the Osprey Meridian has the most noticeable changes as the back system has been replaced with a more basic shoulder harness. This still comes with mesh padding for comfort but you no longer get the hip belt, which was designed for carrying heavier loads and offering more support when carrying the bag on your back for longer periods. Osprey did their research and it turned out that more travellers were using the Meridian for occasional backpack style carrying, and actually utilised the suitcase style wheel function more often. The Sojourn on the other hand was used as a backpack on a more regular basis. 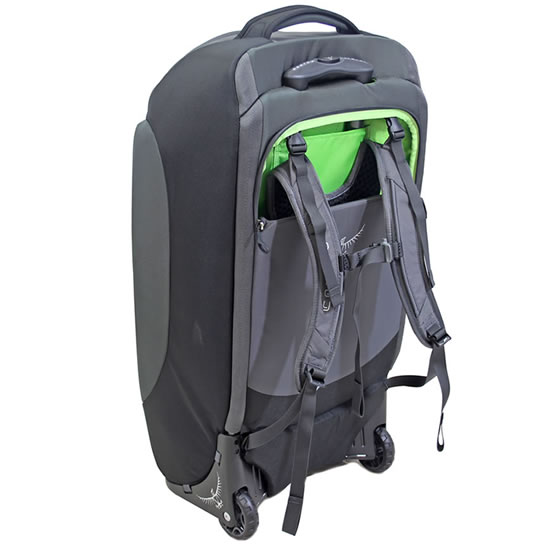 Osprey have kept the Metal Grey colour way for Fall 2016, but have replaced the previous Rusted Red model with a Lagoon Blue option and introduced a Rainforest Green colour way too. In my review of the previous Meridian model, I mentioned that the addition of a third colour (blue) would complete the range for me, so this was a pleasant surprise! The style of the Meridian has changed slightly, but it’s not a huge departure from the previous model, with one of the main aesthetic differences being black instead of clear wheels. The sizes are almost the same as the previous Meridian range, with a choice of either the Meridian 60 (44L + 16L) or Meridian 75 (59L + 16L). The daypack is a little smaller, as it used to be 20 litres, but this isn’t really a noticeable difference and you also get a slightly larger main bag in lieu of this. 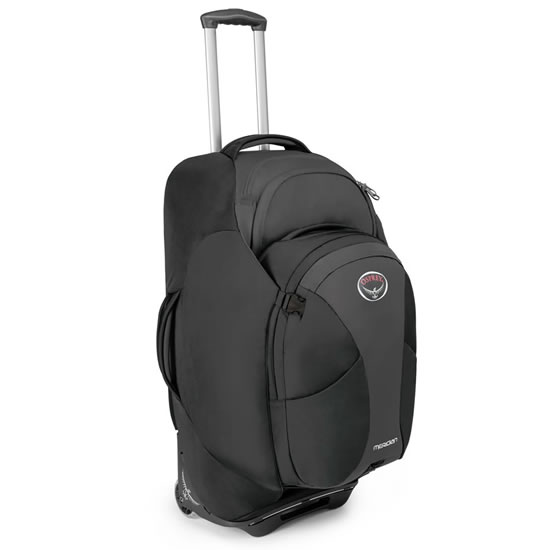 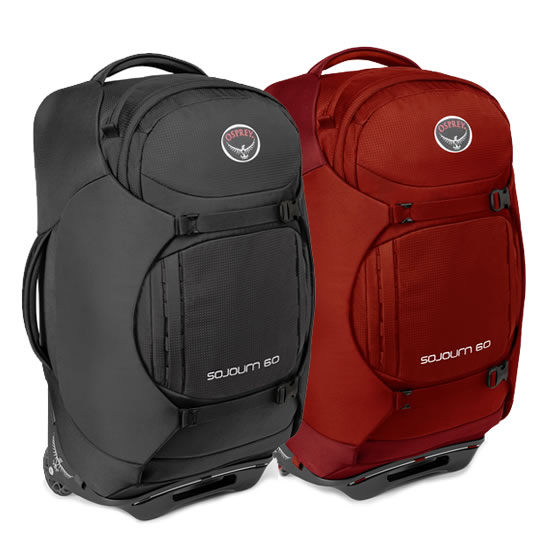 The features of the Osprey Sojourn are largely unchanged. The new Osprey Sojourn has a sleeker appearance and comes in a choice of Flash Black, Hoodoo Red or Nitro Green, it has also kept its adjustable back system, but this has been updated slightly. Osprey have given the Sojourn series an AG AntiGravity inspired trampoline suspended mesh back system, which is still adjustable using the adjustable velcro breakers and features ventilated mesh material on the shoulder straps, back and hip belt area of the harness for added comfort. The back system is designed to be lightweight and is also removable if you decide you don’t need it for a particular trip. 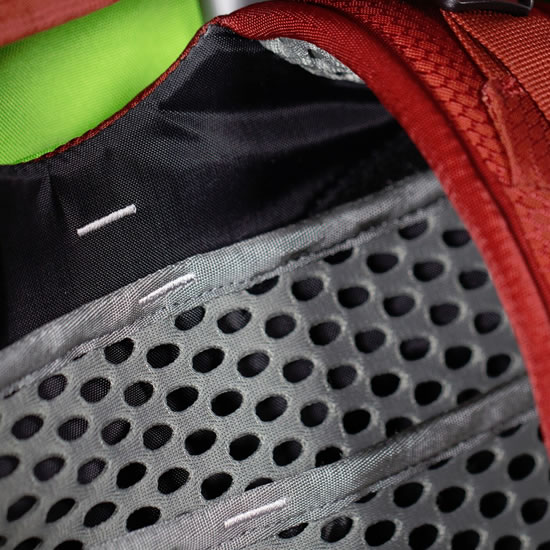 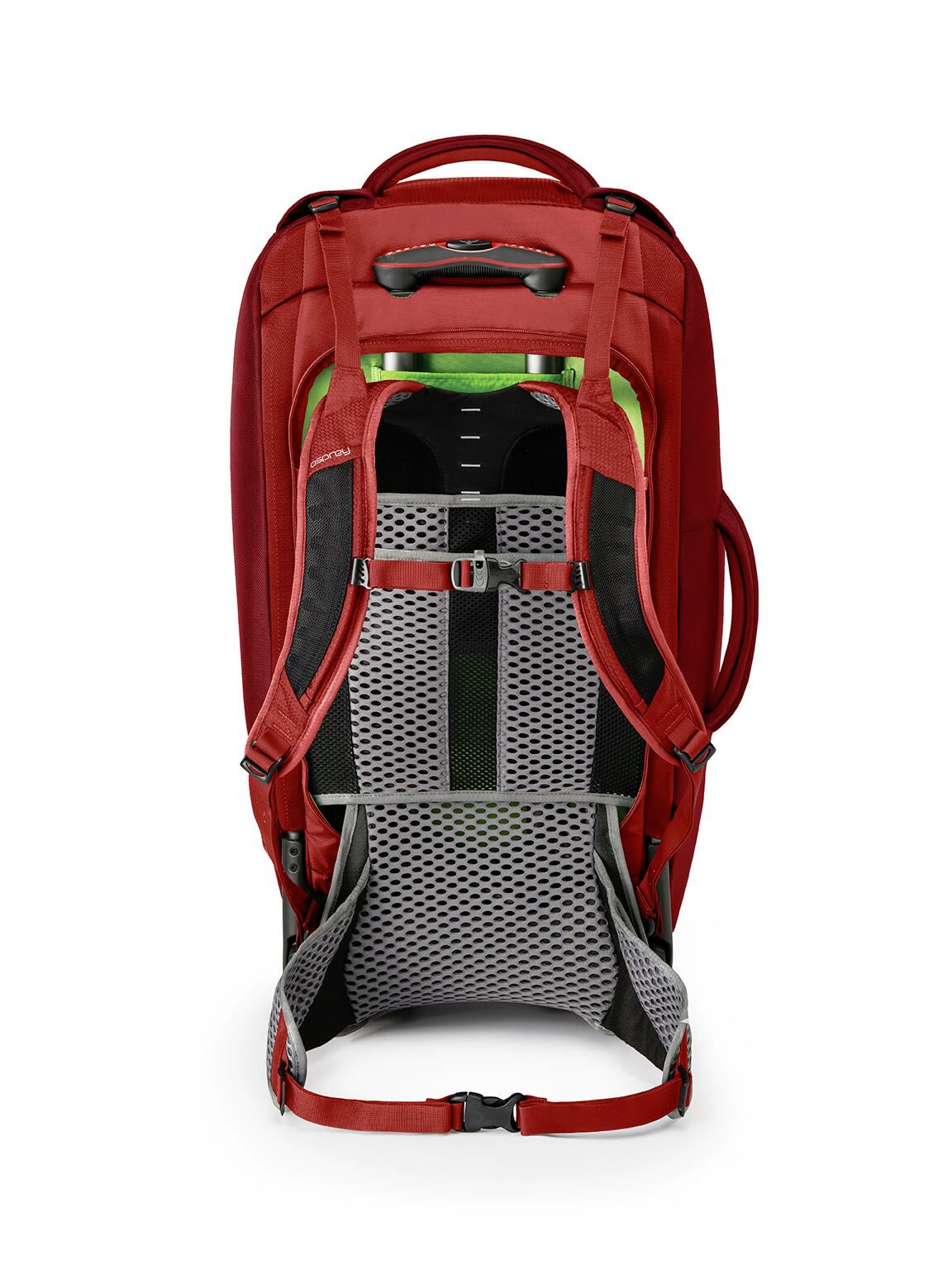 Due to the back system change on the Osprey Meridian & Sojourn, the Sojourn is now a better option if you plan on carrying your bag on your back regularly when travelling, as it has an adjustable back length and comes with a hip belt for added support and stability. The hip belt is a little more flexible compared to the previous model and could perhaps use a little more reinforcement, but will certainly add enough support when carrying the backpack on your back. The Sojourn doesn’t come with a daypack, which is where the Meridian usually wins out, but this is easily remedied by buying the compatible Osprey Daylite daypack, which is designed for use with the Osprey Sojourn range, as well as the Porter and Farpoint 80 travel packs. 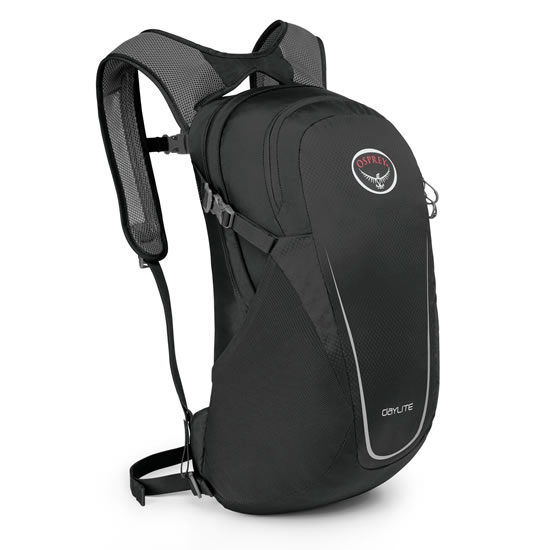 As with the previous model, the Sojourn has the same internal features as the Meridian. The main differences between the Osprey Meridian and Sojourn used to be purely down to the daypack and external StraightJacket compression system, but there are now three major differences due to the change in back system.

With their previous Sojourn and Meridian packs, Osprey gave you bags with fairly similar features and the only key differences were that the Meridian came with a daypack and the Sojourn didn’t, and the Sojourn came with the external StraightJacket compression system, where the Meridian didn’t. This sometimes made it tricky for travellers to decide which one to buy. With the change to the Meridian’s back system, it’s now a bit easier to decide between the two…

Why choose the Osprey Meridian? Although the back system is now much more basic with a set of padded backpack straps instead of a more comprehensive adjustable back system, the Meridian is still a good option for occasional backpack style carrying and for travellers who plan on wheeling the bag more than carrying it on their back. Think flights of stairs, crowded streets or when you need to run to catch a bus, train or flight! Unlike the Sojourn, the Meridian comes with a 20 litre daypack, which is also equipped with a padded laptop/tablet sleeve – a great feature for digital nomads!

Why choose the Osprey Sojourn? The Sojourn has kept its adjustable back system, which makes it a better choice if you plan on carrying your bag on your back regularly when travelling. The hip belt and adjustable torso length provide a more comfortable and supportive fit, enabling the user to carry it on their back for longer periods of time. The 60 & 80 litre sizes also offer more packing space compared to their Meridian alternatives, with 60 litres of packing space for the smaller model and 80 litres for the larger size. If you’d like a daypack, you can buy the Daylite separately, as this is designed for use with Sojourn packs.

RachelRachel worked for the Gap Year Travel Store for 9 years as one of our buying team and so has a wide knowledge of travel gear. She has travelled in Europe and Southeast Asia, but her dream destination would be South America to experience Carnival in Rio, unleash her inner Attenborough in the Galapagos and sip on Colombian coffee in colonial Cartagena.
Posted in:
Gear & Health Advice
Tagged:
backpacks, gear review, osprey, osprey meridian, osprey sojourn, travel gear, wheeled backpacks
Previous article
Travel Health Tips: Latin America
Next article
10 Bucket List Items & Where to Do Them