There are the hard-core, adrenalin-addicted few who base their entire travels around getting their white-knuckle kicks…then there are the rest of us; who, while on our backpacking adventures, find ourselves in the most extraordinary of places. These intriguing environments combined with the feelings of unrestrained freedom tend to urge us to do the craziest of things.

You can find these types of adventure activities all over the world, although registering highest on the adrenalin junkie radar – and streets ahead of all other competition – are the popular gap year destinations of New Zealand and Australia. Both countries self-proclaim themselves ‘adventure capital of the world’ so we’ll leave it to you to pick your side on that one but both undoubtedly are rich in just about every adrenalin activity ever invented (many of them home-invented incidentally) and offer them at a range of locations.

Listed here are our top 10 of adrenalin adventures guaranteed to get the heart thumping while putting you at serious risk of screaming like a girl (which is of course totally acceptable if you happen to be a girl). We have listed where you can find each one but these are by no means exhaustive – there’ll be plenty more tucked away all over the world.

Not so long ago chucking yourself off a tall platform attached by nothing other than a glorified piece of elastic around your ankles would have been considered totally bonkers. These days it is an almost unavoidable rite of passage for gap year travellers, backpackers and adrenalin seeking adventurers. Some say this is tougher than the skydive because YOU have to make the decision to leap. One, two, three…BUNGEEEEEEEEEE!

As white-knuckle thrills and tests of mettle go skydiving would probably have to be the pinnacle. Strapped to an instructor you will be tumbled out of a plane at heights of anything up to 15,000 feet for a 120mph/200kph free-fall which lasts around 45 seconds to a minute. If you dare to open your eyes spectacular views are guaranteed especially if you choose your venue wisely. Photographs and/or video services are often offered as part of a skydive package so you’ll be able to earn yourself some mega kudos after you’ve posted them on Facebook. 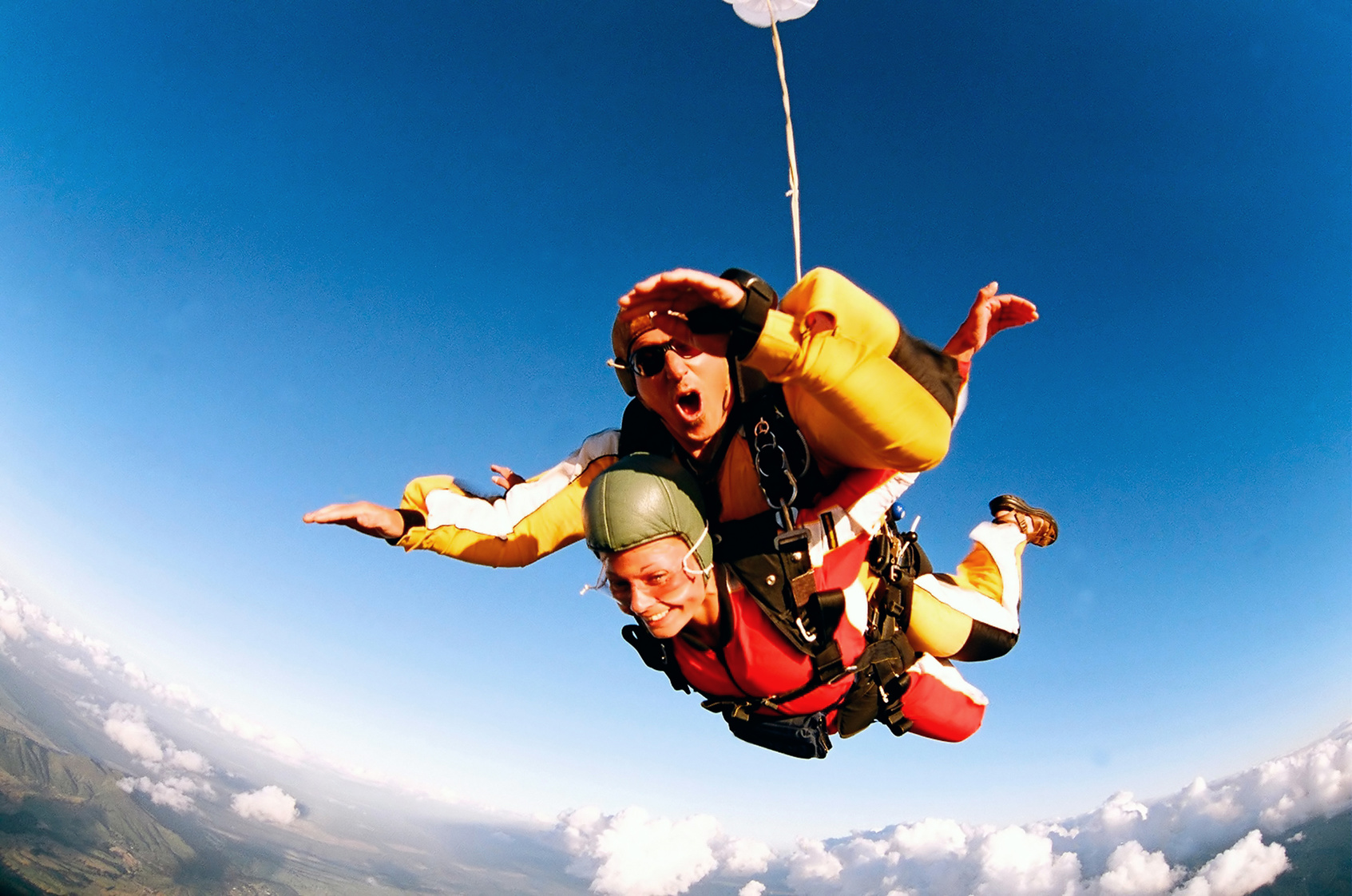 Where in the world: New Zealand, Australia, Hawaii, Namibia, Switzerland.

Unlike most of the other adrenalin fixes listed here which need no prior expertise or skill to participate, surfing requires an enormous amount of time and effort input before you can ever hope to be riding decent size waves or tucking yourself into a barrel like you may have seen in the movies. However, the nature of wave riding is such that thrills can be found right from day one and you may be surprised to learn just how much power even the smallest wave has under the right conditions. Expect to feel like a rag in a washing machine, swallow a fair amount of water and have more fun than you ever thought possible while strapped to a big flotation aid.

Where in the world: Just about everywhere but some of the best and cheapest surf camps are found in Mexico, Costa Rica, Sri Lanka, Morocco and Portugal. New Zealand, Australia, Bali and pretty much every Central and South American country with a coast have their world-class wave spots.

You may never have heard of this one but if you ever had a hamster and it had one of those plastic balls you’ll have a head start on picturing what this is all about. The human-sized plastic ball in this case is set at the top of a hill or incline and then released, often to the accompaniment of shrieks, screams and yells of varying pitches. No matter how spectacular your location you’re unlikely to see much of it except perhaps snatched giddy glimpses and quite possibly from upside down but for those looking for new ways to get their adrenalin fix this could well be it. Variations include orbs filled with extra people or half-filled with water…or both.

Method – find a giant sand dune. Climb to the highest point with a board of some description. Throw yourself head-first from the top. High speeds are normal but quite where the sand ends up when you take a tumble isn’t. The skilful dune-surf standing up but most of us stand little chance of making the bottom that way and go for the body board, prone position. 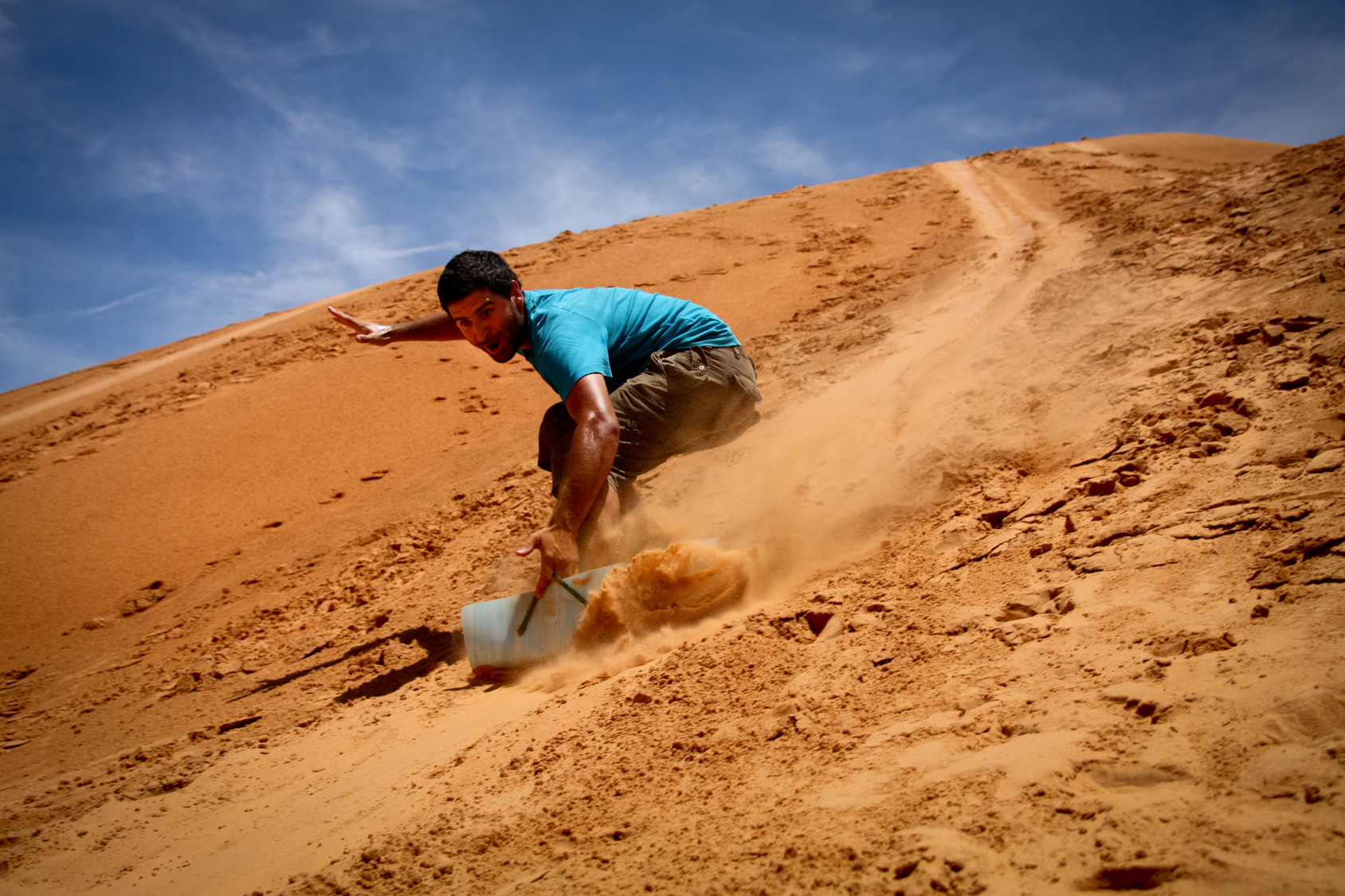 Unlike most of the other offerings in the adrenalin fix list you don’t have to sign up for a tour or with some specialist to get your thrills here. Some places in the world you’ll have to take your own ‘ride’ such as the Far North dunes in New Zealand while at other spots enterprising locals have set up businesses hiring out equipment. If dune-surfing wears thin then sign up for a high speed dune buggy ride such as those found at Huacachina in Peru.

Exhilaration to sheer terror is typically the range of emotions you’ll find with regard to white-water rafting experiences. There are all kinds on offer from lower graded rivers perfect for testing the water and taking in a little scenery to sheer plunges down waterfalls combined with jaw-clenching, cannon-ball-like shooting of rapids. If conventional white water rafting all seems a little tame there are places in the world where you can ditch the boat and just grab a body board instead for a spot of white water sledging – definitely not for the faint-hearted.

Serenity and adrenalin fixes don’t typically go together in sentences but where scuba diving is concerned they do. Just about everywhere are spectacular underwater worlds which can only be fully appreciated once they have been viewed first hand and also all over the world are companies with the skills and means to deliver this to you.

Depending on where you are scuba diving can be a little expensive but there are also places such as Thailand where they are dirt cheap and still safe; many travellers come here purely to get themselves diver qualified on PADI courses for a fraction of what it would cost elsewhere. If you’re not interested in a course though there are plenty of ‘try dive’ experiences too which require nothing more than running through a few safety drills before you’re headed out and swimming among colourful corals, curious turtles and multitudes of fish. For the hardcore adrenalin seeker there’s cave diving opportunities such as that at the cenotes in Mexico.

No matter how much of a steely hard-case you consider yourself you WILL have at least a slight moment of absolute terror as you watch your first shark heading straight for you. Try and sign up with a tour operator who’s deemed to be conservation conscious and if sharks are something which really float your boat more in-depth packages are available. At Isla Guadelupe in Mexico, for example, you can opt for a package which gives you six whole days of great white viewing. 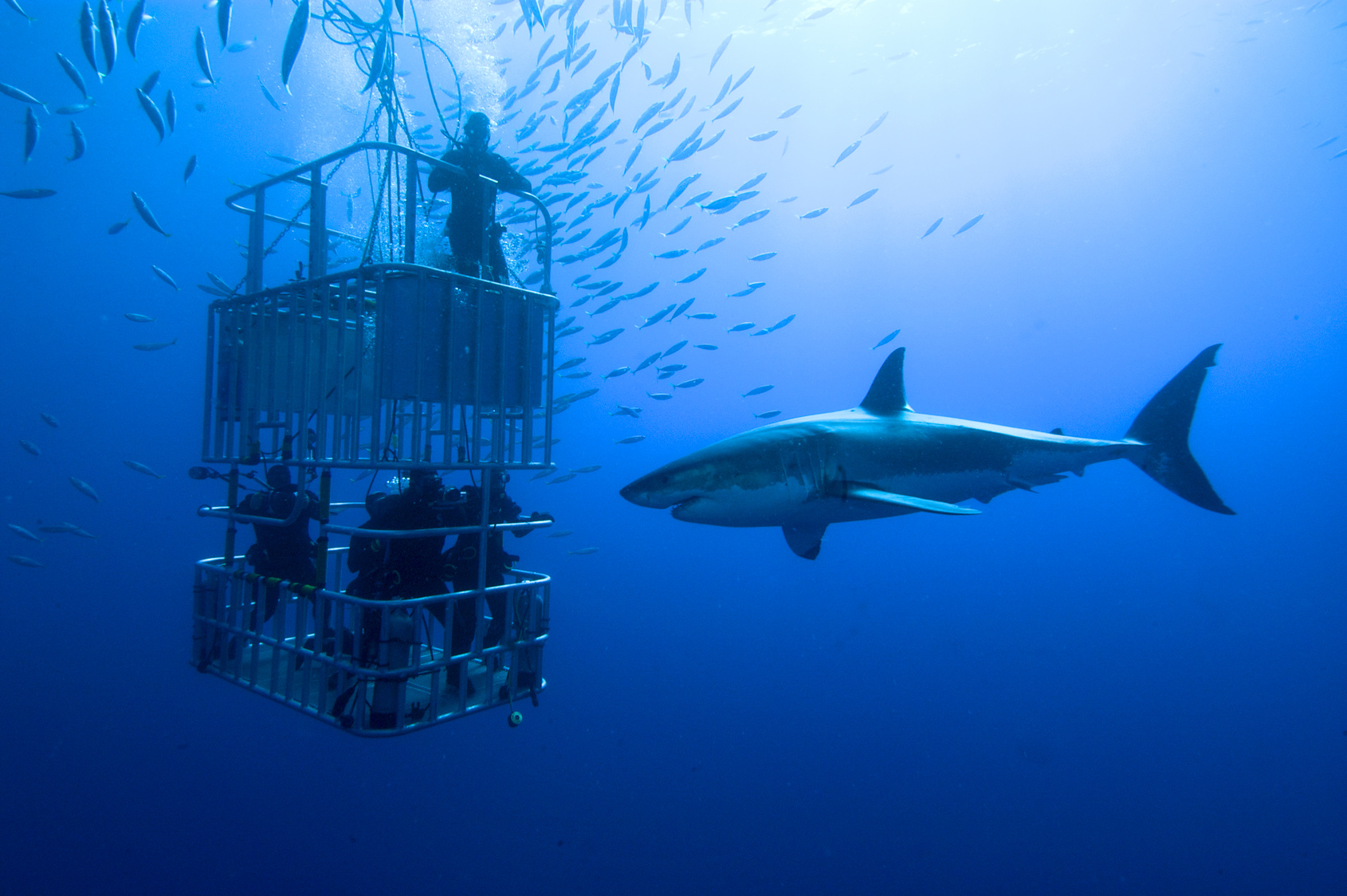 Where in the world: South Africa, Australia, Mexico, New Zealand, Bahamas (this one is cage-free!!)

If there’s a rocky coastline then it is possible to coasteer. In simple terms coasteering is a journey and almost certainly an adventure along an intertidal shoreline and, as with several of the other adrenalin focused activities, it’s up to you how extreme you go. Elements may include swimming (sometimes extreme swimming in white water or areas of high current movement), climbing, scrambling, canyoning, abseiling, jumping and diving while sporting a fetching outfit of wetsuit and safety helmet. The cliff jumping/diving part is often optional but as there isn’t always an alternative route you’ll have to check if you’re not keen on this bit.

Where in the world: UK, New Zealand, Australia

Presumably neither of these activities need any introduction but what might surprise you is some of the places in the world where you can do this. For example did you know that New Zealand, Australia, Greece and Japan all have great ski areas? Some places are better for skiing, others for snowboarding while some have equal merits, so do your research. Coasteering can be extremely physically demanding so be sure you know just what is included before you sign your name on the dotted line.

Where in the world: Probably far too many to mention but both Canada and the USA are considered world-class as well as several European destinations which include Switzerland, France and Austria. If you’re looking for the cheapest places to learn it is France or Slovenia every time.

Other Activities for Adrenaline Junkies…

RachelRachel worked for the Gap Year Travel Store for 9 years as one of our buying team and so has a wide knowledge of travel gear. She has travelled in Europe and Southeast Asia, but her dream destination would be South America to experience Carnival in Rio, unleash her inner Attenborough in the Galapagos and sip on Colombian coffee in colonial Cartagena.
Posted in:
Top 10
Tagged:
adventure travel, australia, bungee, new zealand, skydive, zorbing
Previous article
A Guide to Travel Money
Next article
A Guide to Travelling in South East Asia