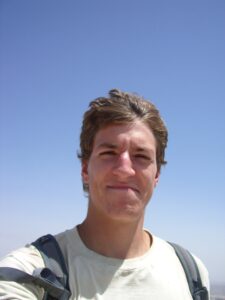 Tom spent 2 and a half months backpacking through the Middle East after a stint in Eastern Europe, here he gives you an account of his experiences as well as helpful tips and advice.

My travels in the Middle East followed on from the three months I spent travelling through Eastern Europe, and a fantastic two weeks in Turkey.

Turkey was superb, and my Efes drinking trail took me from Istanbul across to Capadocia, where I camped for a week and explored the crazy ‘lunar’ landscape by bicycle. I then spent some time down on the coast near the town of Mersin sleeping in a dried up storm drain under a  forestry track (surprisingly comfortable!) and going for walks up into the hills where I was delighted to see wild boar and tortoises. 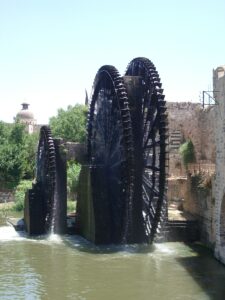 From here I took a bus to Antakya (Hatay) then hitched, first on the back of a moped with a policeman, then on the back of a rickety old motorbike (already with a passenger) to Syria, and I had the peculiar feeling that I wasn’t even sitting on the bike as I clung onto the baggage rail with my flip-flopped feet skimming the hot tarmac at fifty miles an hour! – I was decidedly relieved when the border came into view.

Even for the disorganised, last minute everything traveller like me, I would suggest getting a Syrian visa before you go because I spent a tiring 12 hours arguing with the officials and ended up paying slightly over the odds to get in. After finally getting through I proceeded to the city of Aleppo which although stifling and hot was vibrant and colourful and a really pleasant shock to the senses. 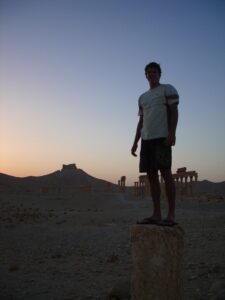 I continued along to Hama and saw the incredible groaning waterwheels, used historically for irrigating the surrounding fields when very dry, and the dead cities where remains of ancient Byzantine civilisations decimated by several severe earthquakes and subsequent population collapse can still be seen and absorbed. I then travelled via the incredible Crac de Chevaliers crusader castle (which was the windiest place on the planet) to Damascus the capital.

I haven’t got a bad word to say about this city which I found exciting, interesting and unusual in all the right measures, and although it takes a bit of asking to find a cool beer – when you find the place you’ll be among friends as it is the mecca for many a weary and thirsty traveller.  A final must in Syria is to travel out to the city of Palmyra in the Syrian desert, to see the long lost but now excavated ruins and amphi-theatre, observed by camels and wild Arab horsemen.

I dropped briefly into Beirut but could only afford a two day visa, so enjoyed a nice bit of R and R but was glad to leave because although pleasant, was much like any other capital city in Europe (and I narrowly avoided having my trip cut short by a journey home in a British frigate, when the war with Israel was declared). 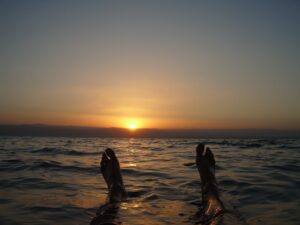 I continued on into Jordan which I found to be another great place, Amman, having much to see especially the historical ruins, and many helpful travel agents and cheap hotels to unwind in. It was from here that I planned my trip down the Dead-Sea highway, so I took a bus to the nearest town on the coast, and stuck out my thumb

As with all hitching you have good days and bad, and this day I got very lucky being carried 300km by two drivers landing me on the edge of the Dead Sea itself. This has got to be one of those ‘things to do before you die’ because plopping into a sea viscous with salt and bobbing around like a cork is hilarious, but a word of warning: several sore patches where my backpack had rubbed (and my tender bits!) immediately alerted me to their presence and also whilst splashing around like a hyper-active school kid I caught an eyeful of water, and  had to blindly struggle back to shore and pat around for my water-bottle to cease the pain. The police can forget mace; a bottle of Dead Sea splashed in someone’s eyes is enough to incapacitate anyone!

I travelled on to the magical town of Wadi Musa which I used as a base to visit the remains at Petra ‘the rose red city’ which are (although a bit of a tourist trap) a must see. Made famous by the Indiana Jones scene, the ancient Nabataeans (pre-Roman Arabs controlling the frankincense trade)  incredible hidden valley of facades and tombs, and the surrounding mountains (which are deserted) are magnificent.

I also travelled on down to Wadi Rum and spent several nights and days with the Bedouin, sleeping in goat hair tents, seeing the desert by 4×4 and camel and seeing Lawrence of Arabia territory.

I finished my Jordan visit on the coast of the red sea at Aqaba, where I snorkelled on crystal clear reefs (and even a large eerie wreck) and soaked up the scorching sun. I returned home by getting a flight to Spain to run of the bulls in Pamplona (a more exhilarating experience is hard to find) and then getting the ferry from Santander to Plymouth to end five and a half months of fantastic adventure. To anyone contemplating a trip of any sort in their gap year all I can say is this; dive in head first, good luck, and you certainly won’t regret it!

RachelRachel worked for the Gap Year Travel Store for 9 years as one of our buying team and so has a wide knowledge of travel gear. She has travelled in Europe and Southeast Asia, but her dream destination would be South America to experience Carnival in Rio, unleash her inner Attenborough in the Galapagos and sip on Colombian coffee in colonial Cartagena.
Posted in:
Volunteering
Previous article
5 Things I Wouldn’t Leave At Home On My Gap Year
Next article
Volunteering in Sri Lanka