Japan is full of the fascinatingly juxtaposed elements of uber-modern futuristic cities alongside tiny rural settlements still going about life much as they did centuries ago; the whole is surrounded by a natural landscape designed to take your breath away again and again. In short – Japan is packed with enchantments. This is the land where east meets west…where ancient and modern sit side-by-side. This is the land whose history was shaped by ancient shoguns, emperors and martial arts; a land of tea ceremonies and Buddhist temples perched on mountainsides; of seemingly endless oceans of cherry blossoms and the only places on the planet in history to have been devastated by nuclear attacks; of snow-covered monkeys bathing in spa pools and acres of Zen gardens whose only sounds are birdsong and trickling waters.

Known as the Land of the Rising Sun, Japan has beautiful beaches lapped not just by the Pacific Ocean but also by the East China Sea and the Sea of Japan for sunbathing, surfing, diving, cruising and swimming while there are also mountains for skiing, rivers for white-water rafting and no end of natural wonders to explore; in total Japan has endless appeal for the adventurer, the outdoor-lover and the culture-vulture. 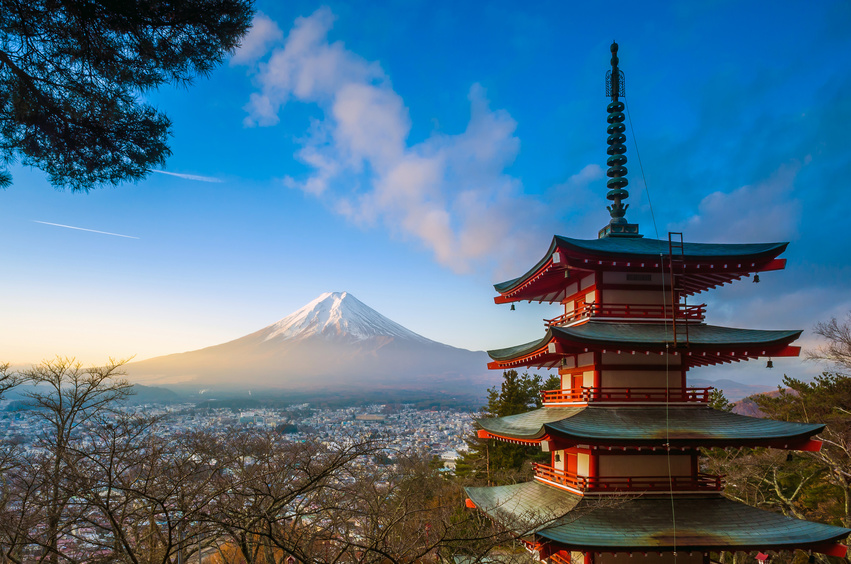 So why so few backpackers and gap year takers here? The country does have something of a reputation for being expensive which perhaps keeps the budget-conscious traveller away, but the truth is there are all kinds of ways to keep the costs down and there are bargains to be had; one such is the Japan Rail Pass which offers discounted, unlimited train travel to tourists.

It is unlikely Japan will pass under the radar of the travelling hordes for much longer. The highlights here are beyond count and include such things as national parks, volcanic Mount Fuji – the country’s highest peak – primeval forest, the chance for overnighting in ancient temples with monks, feudal castles, Shinto shrines, the tons of festivals and heaps more. Besides all of that, here are some of the main reasons you should be including Japan on that gap year or round the world trip.

Many countries in the world like to pride themselves on owning a different or unique culture but nowhere is this perhaps truer than with Japan. Any nation which has been isolated or shut-off from the rest of the world for parts of its history – as was Japan – is going to have developed distinctly and differently with regard to language, culture, beliefs, arts, traditions and architecture. Japan is a heady treat for each of the senses and at times a bewildering but exciting mix of very ancient with ultra-modern. Spiritually traditional and 21st century-materialism rub shoulders, quite literally sometimes, which can make things both surreal and interesting for Japan’s visitors.

Shrines, temples, ancient wooden castles, and dream-like gardens are all found and representative of how life was lived in this country centuries ago while tea ceremonies, calligraphy, poetry, painting, martial arts and ceramic making techniques, which have changed little since mediaeval times, can all be experienced.

Also of enormous significance to the history buff – or those just interested in the story of humankind – are the Peace Parks and Memorial Museums of Hiroshima and Nagasaki; the sites of the first and only nuclear attacks in history, which took place in WWII.

If you rate yourself as a bit of a discerning food connoisseur (or even just like to eat!) you are going to be in heaven in Japan. The staples are rice and noodles as they are elsewhere in Asia and soya and seafood play big roles but otherwise Japanese cuisine doesn’t resemble that of anywhere else in the world. The sheer number of restaurants will blow your mind. Even if you don’t make it out of Tokyo you will find more Michelin-rated restaurants than in Paris and London combined. 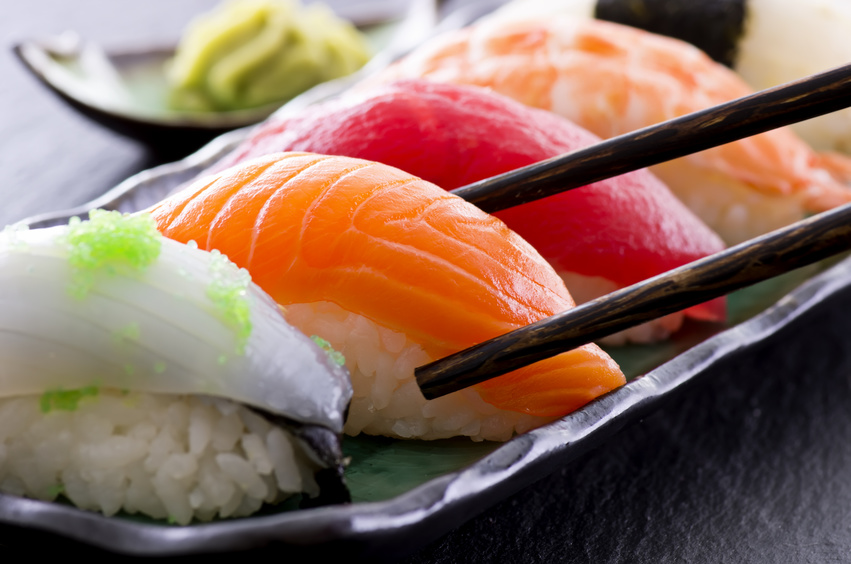 Most Westerners will be familiar with the famous sushi and sashami dishes because these (usually raw fish) delicacies are big business and culinary darlings of both Europe and the US. In Japan you will find them everywhere and in varying forms. In fact, travelling from place to place in Japan will throw up regional speciality after regional speciality on the subject of food – each totally different to anything you have tried or seen before in the country. Dishes are driven by what can grow and thrive or live in the waters locally so fresh and healthy tend to be the watchwords everywhere.

One strange delicacy of Japan is the highly poisonous puffer fish – fugu – which might be priced off the backpacker budget due to the time, skill and energy it takes to prepare the fish to ensure it doesn’t kill those who choose to dine on it.

Heaving and ultra-modern metropolises might be what most would conjure up first in their mind’s eye when asked to think of Japan. However, the natural world here is stunning and an element which many are unaware exists here at all. There are mountains full of temples which offer idyllic representations of the seasons as they come and go such as vibrant autumn colours or the hushed whites of winter snows. There are coastlines full of lovely beaches and stunning scenery such as those of the Noto Peninsula or any number of islands including Shikoku and Shodoshima.

The Tottori Sand-dunes are vast (up to two kilometres wide/50 meters high) and desert-like with camel rides possible to add to the effect while elsewhere you will find cascading waterfalls, swathes of bamboo whispering in the breeze, forests and highly scenic rivers. If you are looking for naturally stunning Japan will not disappoint.

No Safety or Health Issues

Tap water is good to drink, food hygiene is not an issue and healthcare, should you need it, is state-of-the-art and readily available. Malaria is not present and there are typically no extra vaccines you will need to travel here which wouldn’t be recommended elsewhere. You might think Japanese encephalitis would be a risk – what with Japan being in the disease’s name and all – but actually this mosquito-borne illness is all but eradicated. Crime-wise and even with relation to women travelling alone, Japan is about as safe as it gets. Crime rates here are quite possibly significantly lower than your own country – depending on where that is.

Experience the Truly Unusual – The Snow Monkeys of Joshinetsu Kogen

As wildlife encounters go the world is sprinkled with the iconic and the uniquely once-in-a-lifetime; experiences such as watching the wildebeest migration in Africa, kayaking with killer whales in Canada or trekking to see orangutan in the jungles of Indonesia and Malaysia. Right up there with such wish-list encounters is that of watching snow-encrusted monkeys warm their shivering bones in the natural hot pools of Joshinetsu Kogen National Park. Whatever else you do in Japan do not miss this amazing sight. 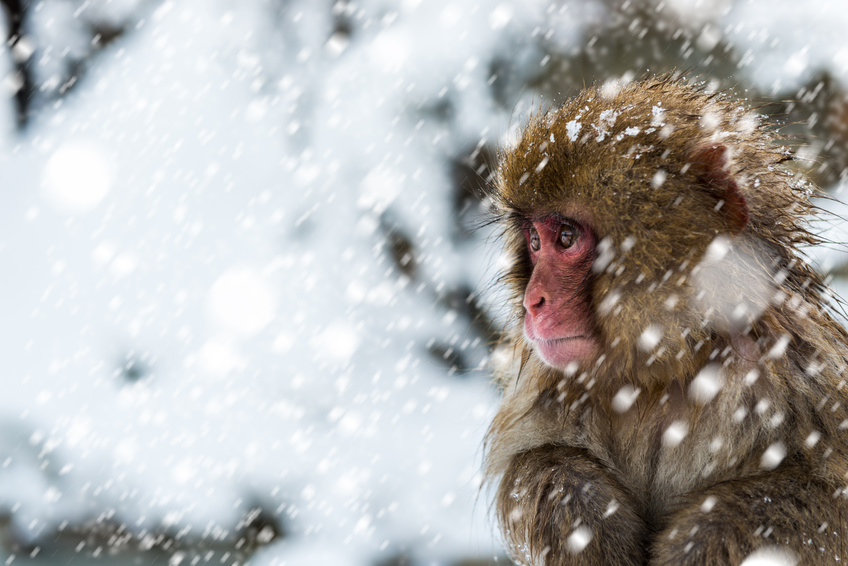 If you have never heard of Japan’s iconic cherry blossom displays you have either been living underground or the sort of person who is not moved by the breathtakingly beautiful vision of a sea of trees and the grounds beneath them swimming in pink blossoms. For many who see it for the first time, this sight moves them to both tears and the sudden urge to write something poetic. Guaranteed to stop foreign visitors in their footsteps to simply gaze, the blossom displays are an incredibly important season for the Japanese too. This is the time of ‘hanami’ which translated directly means ‘looking at flowers’. The locals head out in their thousands to do just that, armed with a picnic (and booze) to spread out beneath the trees in order to prolong the whole appreciation thing. Night illuminations are often offered too across parks and gardens.

There is even a national countdown – a televised event which first forecasts the blooms’ arrival and then tracks their exploding into life northwards through the regions of Japan and her islands. Just as is the case with all of Mother Nature’s wonders, the exact timing and arrival of the blossoms can’t be predicted in advance; it all depends on weather. However, typically speaking the first floral spectacles burst out around January in the south and move up from there to arrive around April and May in the north.

No faffing around required to get visas to visit here is required for citizens of most countries. If you want to work or study it is a bit different but if you are from a European Union country, the UK, Australia, New Zealand, Canada, the USA or several other countries and just coming to visit for tourism you can get a 90 day visa on arrival with extensions possible.

Many travellers avoid Japan thinking it is beyond their price range and indeed if you compare it with South East Asia it is not a cheap destination. However, backpackers and gap year takers surge to Australia and New Zealand – two countries which also veer towards the more expensive end of things and can actually be more expensive than Japan.

There are ways to cut the costs in Japan making it feasible for those with lower travel budgets – one of these is the wonderful discount rail system available to tourists. Trains link just about everywhere in Japan via wonderfully efficient, fast and modern rail networks (which include sleeper train options). The variety of train types and ticket types is almost bewilderingly complicated but the only thing you definitely need to memorise are these three words – ‘Japan Rail Pass’. Unlimited travel passes can be bought for 7, 14 or 21 days and will save you heaps over purchasing individual tickets. One very important point here though is the fact that you can ONLY buy the pass outside of the country so you will need to do some planning before arrival with regard to this.